Siljansleden ‘The Siljan Trail’ between Fryksås and Rättvik is one of twelve Swedish signature trails - and perfect for a hiking weekend. Jonathan Lundmark put on his walking shoes and got out on a hike through Dalarna. Here he talks about the hike, the stages, the overnight stays, the food, the surface, the nature, the terrain, the thoughts and the experiences. Join him on Siljansleden.

Working from home during the Corona pandemic created an urge to get out into nature. I visited STF (Swedish Tourist Association) and found Siljansleden to be a designated signature trail not that far from Stockholm and a perfect getaway over the course of a weekend with just an additional vacant day. The hike taking place in Dalarna was a beautiful forest packed endeavour that I would highly recommend to anyone with a hiking interest or just wanting to get closer to nature.

We started our journey in Fryksås as suggested by the Swedish Tourist Association, where we arrived the evening before starting our trek. The village is famed for hosting numerous old cottages (“Fäbod” in swedish) that have come to be iconic for Sweden.

You can rent your very own Fäbod cottage, which is something we did and which was definitely a highlight of the trek, establishing a very pleasant start. Most cottages had open fireplaces, very cozy semi-closed beds with knitted drapes and a generally calming atmosphere. Most bathrooms and kitchens had however been renovated, which to me served as a perfect combination of old and new - basically keeping things “fresh” and easy to keep clean where you want it the most.

The first we day left our cottage in Fryksås and headed towards Orsa. Because Fryksås lies at a higher altitude than Orsa we were hiking downhill and could take in beautiful sceneries in front of us where we saw vast forests stretching as far the eye can see and overlooking the beautiful lake Siljan.

The trek was 11 km long and going downhill with well-marked trails all the way, so it was an easy start. It was a sunny day and the path led us through dense forests with one or two water streams which we passed over small bridges. We encountered some snow on the ground as well even though we hiked in the middle of May.

Although we had our tent with us, we decided to treat ourselves with sleeping at Trunna vandrarhem bed & breakfast after arriving in Orsa. I would highly recommend their breakfast buffet which included home baked bread and pancakes for a very reasonable price. We treated ourselves with a proper meal (burgers) in Orsa before going to bed for the night. 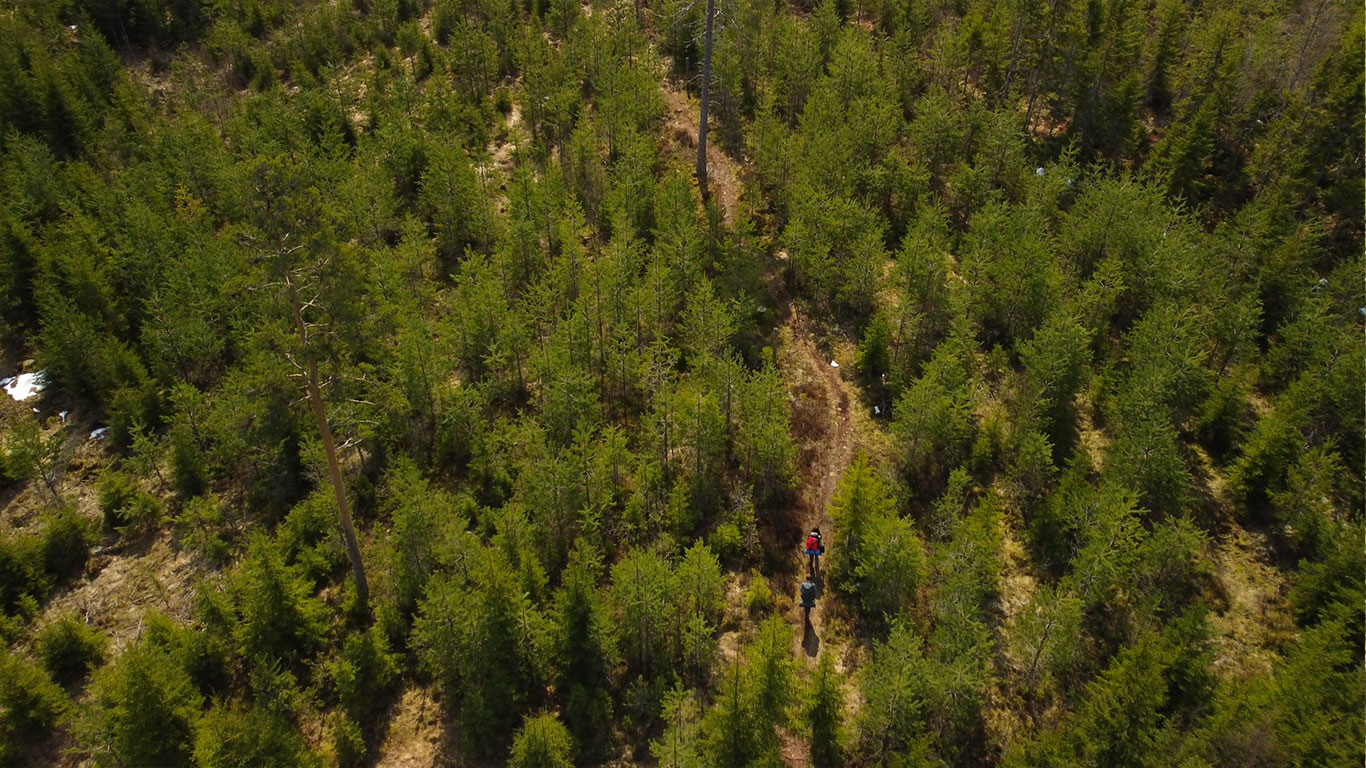 The second day after having a delicious breakfast at the hostel, we set off on the second section of the Siljan trail towards Brunnvasselbodarna. Early on we passed a waterfall and hiked through a village with some spread out houses, some hiking here took place on ordinary roads while getting out of the city but we were quickly back into the forest.

The trek went through forests with occasional farms popping up with animals that walked up to us as we approached, ranging from horses to sheep and cows. The paths in the forest were a mix of hiking trails and gravel roads. In terms of wildlife there were a lot of bird sounds (incl. woodpeckers) and ant hills along the trails, we were also warned that there could be bears in the area which should definitely be treated with respect - do not approach any bears if you are lucky to encounter them.

We walked about 17km before we reached Brunnvasselbodarna that marked the end of section 2 and which was located just by a river with some nice tenting spots on leveled grass. Again we encountered a lot of beautiful old Swedish cottages (Fäbod) in the area. At that point we felt we still had a lot of energy and it was only early in the afternoon, so we decided to walk on towards “Ickån” (about half of section 3) where we knew there was a really cozy “free to use” shelter with a fire-cabin.

Leaving Brunnvasselbodarna there was a very straight and long tree avenue with no incline or decline whatsoever so the trek progressed with ease. It felt like it went on forever and it was a unique experience walking a 2km+ perfectly straight strip being surrounded by forest on each side of the road.

After a couple of additional kilometres, we arrived by Ickån (a river) and were able to set up camp within a shelter. The shelter had wood supplies and an axe, so we were able to cut some wood and start a fire inside of it to heat up our food and the hut itself. There were also some candles inside and a journal where previous trekkers had written about their experience so far, we added a note ourselves.

Again, we did not have to pitch our tent, which by this point was feeling somewhat redundant. Instead, we layed out our sleeping mattresses in the wooden benches within the cabin that could easily fit 6 people but which we had the luxury of having to ourselves!

After cooking our food over the open fire, we went to bed with the soothing sound of river Ickån just outside. It took us 5 minutes to fall asleep... 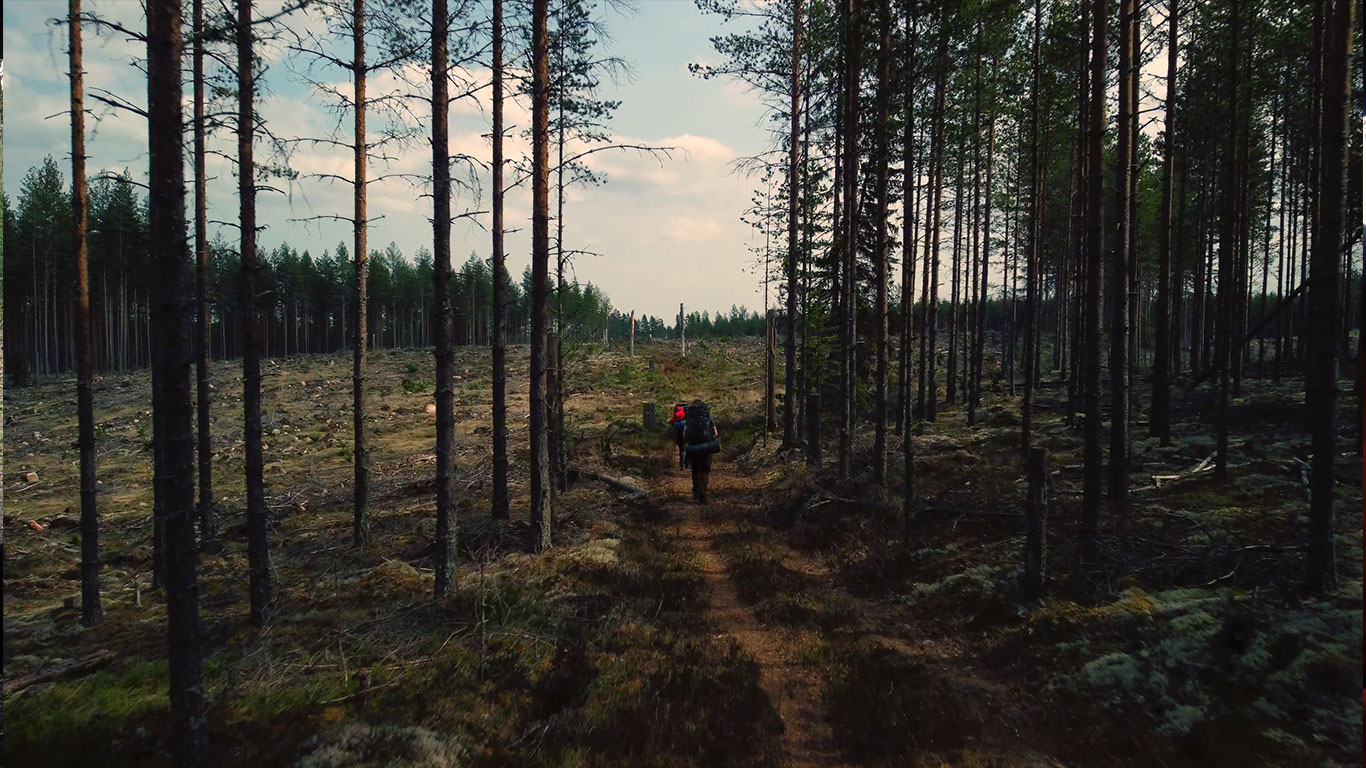 On the morning of day 3 we fried ourselves some delicious pancakes before setting out to hike again. It was practical sleeping next to a river as we could rinse off our cooking utilities right after breakfast. The cabin we left was halfway through section 3 towards “Tammeråsen”, that was already a quite short section, so it didn’t take us long before we got there (only about an additional 3-4 km).

Tammeråsen was a small village with some surrounding farms and we were greeted by a local resident that happily offered us a place to stay for the night. Because it was so early and we felt we had just started our hike we decided to march on to possibly complete section 4 and finish our trek the same day.

It started to rain during the day and as we progressed there were some muddy obstacles to overcome. There were also a lot of fallen trees on the path that felt somewhat like an obstacle course to pass.

The path progressed through forests and open terrain with some occasional cut down processed forest areas. After walking within a forest, it was nice with a change of scenery so in fact we did not mind. The trail was well-marked and easily trekked even though we definitively started feeling our legs become sore due to pushing ourselves the day before.

Before reaching Rättvik we found a nice shelter along the route where we stopped to cook and eat noodles before pushing through in the rain. It tasted so much better than it usually does, an effect hiking always has on you!

With food in our stomachs, we went back at it through the rain. The remaining trails before reaching a coastline were mostly on gravel roads within forests and some villages that we passed. With only about 4km left we were getting tired and stopped talking to each other, just focusing on progressing on the trail. Probably the bad weather was getting to us. We ultimately reached a coastline that we followed until Rättvik unveiled itself – our destination for the trek. The first sign of Rättvik was an old church that we hiked around which was beautifully located next to the lake Siljan along with some old cottages.

As always after reaching the final destination of a trek, the feeling of exhaustion rolls over you but in a good way, mixing feelings of joy, calm and a slight sense of pride in having overcome the challenge. 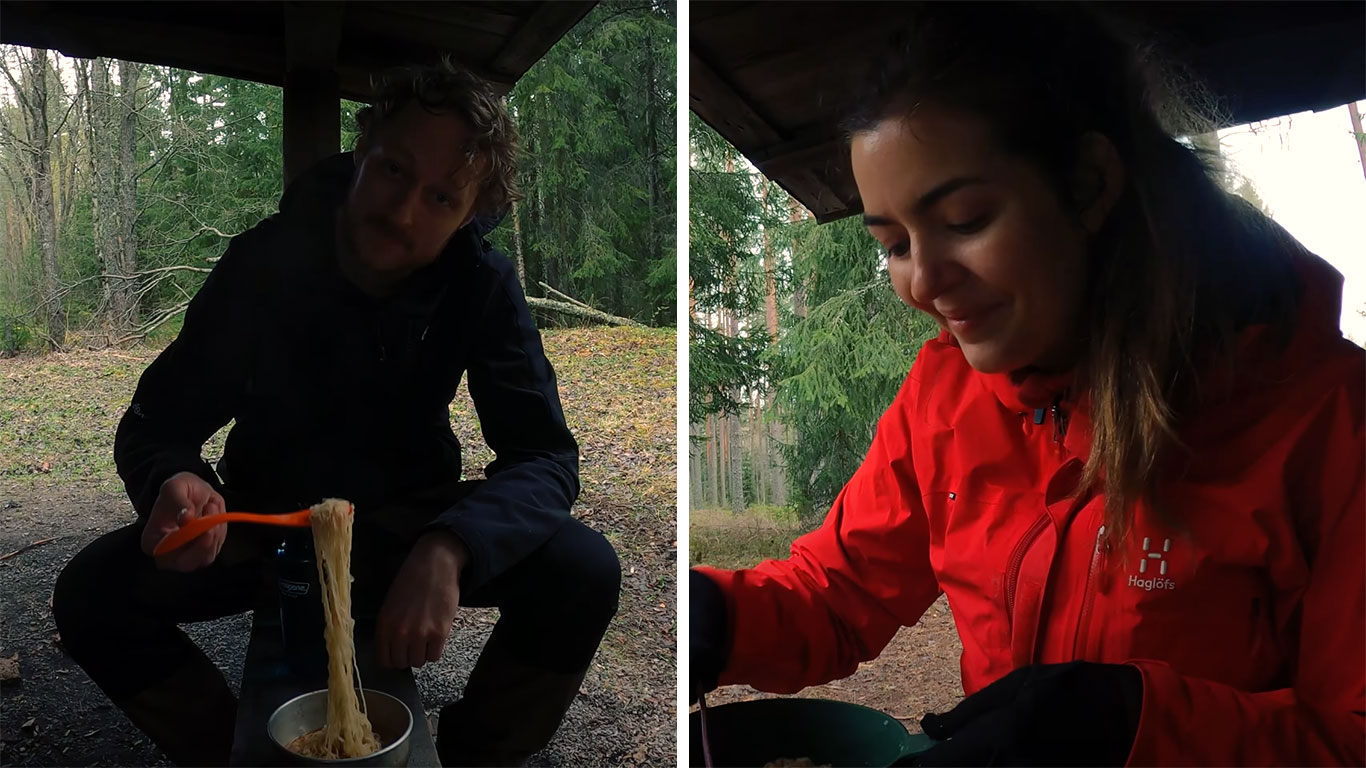 The signature trail Siljan in Dalarna as appointed by STF (Svenska Turistföreningen, Swedish Tourist Association) was a pleasant hiking experience that is suitable for beginners but can still be adapted in pace to become a moderately strenuous trek.

In terms of wildlife and general wilderness there were some beautiful forest areas and even a waterfall, but one should not expect too much, it’s more a trek where one gets to experience old genuine Swedish culture such as cozy cottages along the way (Fäbod) which is most likely why it was appointed one of the signature trails of Sweden to begin with.

We brought our tent but did not use it once, however we might not have gotten so lucky when we reached our shelters and there is no guarantee that there will be space for you if you decide to leave your tent at home, so better be on the safe side and bring it!

If you too are looking to get out into nature, not having to worry about more than where to sleep and what to eat as well as taking in some Swedish cultural heritage and unique surroundings, the signature trail Siljan is a great little gem in Dalarna well worth a visit!

How to get here?

More about the Siljan Trail