Alderängarna's nature reserve is just outside Mora towards Älvdalen. Here a labyrinthine area of ​​meadows and waterways awaits with unusual animals and plants. A nine kilometer long hiking trail runs through the area. Take the path from the parking lot and walk down the stairs to the cobbled beaches by the river. The area is also an example of an inland delta.

Geology
Alderängarna are part of the large Mora field, which is composed of several different sand deposits. Here, from the ice age to the present, two generations of rivers have left their mark in the landscape. One of the country's largest glacier deltas has been formed where Österdalälven today flows into the Siljansringen, west of Mora.

When the ice receded 10,000 years ago, an ice river ran along the valley of Österdalälven, which ended up in a bay in the Siljans area's ring-shaped crater. Huge amounts of sand were deposited and formed one of Sweden's largest iceberg deltas.

As soon as the delta was laid dry through the land elevation, the sandy surface was transformed by the wind into a rolling dune field, Scandinavia's largest. Österdalälven has since gradually cut itself deep through the delta and today there is a magnificent riverbed with today's smaller delta, wide river planes, terraces and arch-shaped slopes.

Flora and fauna:
At the river level, the moist deciduous forests that have grown up on the former meadow and along the water courses dominate today. The vegetation type that is particularly characteristic of the area is the pebble beach, whose counterpart is missing in Dalarna. Here there is a strange flora with many rare species, such as mountain carnation, dewdrop and Kung Karls spira. The rich supply of hollow trees, for example, attracts the crow and the owl to nest.

Practical Information:
On the site there is a resting place, outdoor toilet, fire place as well as wind shelter. There is also a 9 km long walkingtrail.

About 5 km outside Mora towards Älvdalen. Parking is at highway 70. 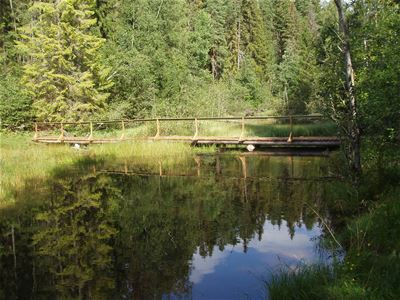 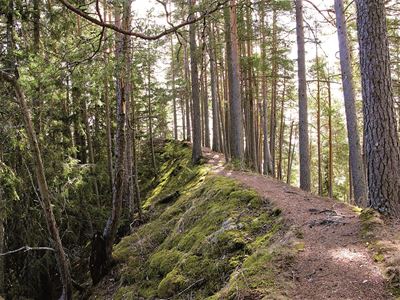 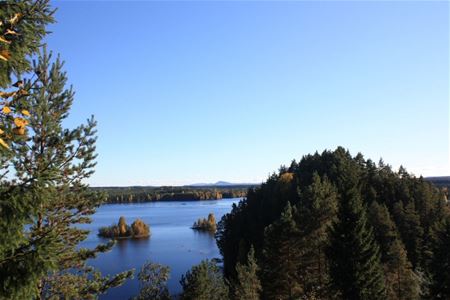