Säterdalen is a half-mile long canyon system with a truly unique character. Here are the Children's Valley - a playground for children of all ages with vivid summer pasture in summer, fishing, climbing frames, huge rush treads and Dalstugan with a café and restaurant. Säters Folkpark with events all year round, great hiking trails and much more. In summer there are many events in the valley as children's theater, flea market and vintage car exhibitions on Tuesdays, countryjam, dances with dance bands, midsummer celebration etc. 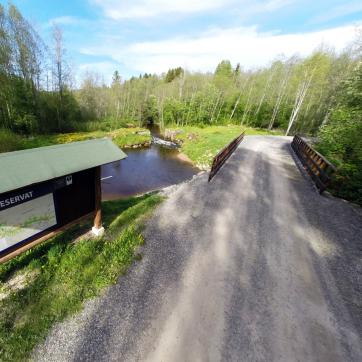 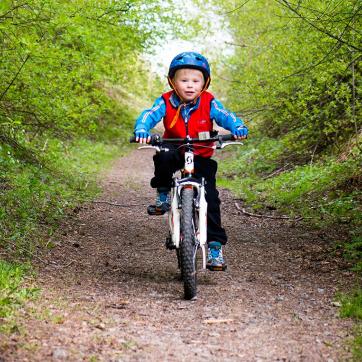 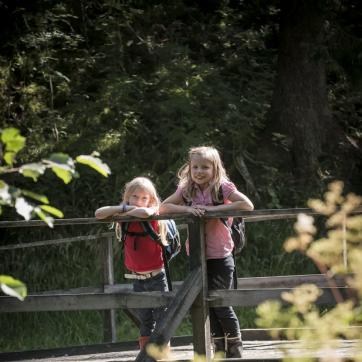 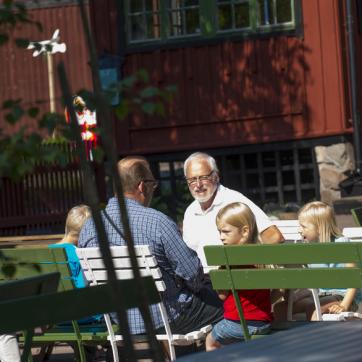 The most beautiful located Folkpark in Sweden? Yes, there can´t be many other Folkparker that´s located more nice than Säterdalen. It´s a pride to the people of Säter.

Säters folkpark is owned by Yvonne and Thomas Jansson and their family. They make pleasant events all year round. In the summer there´s a large amount of events in the Folkpark for all kind of ages. Recurring events are children´s theater, flea market, vintage car exhibitions on Tuesdays, countryjam, dance with dance bands, midsummer celebration and more. Just a few steps away from the center of Säter, on Spikholmen by Ljusterån, the folkpark is one of the first things you see when you´ve gone down in the valley.

Ljusteråns meandering water makes you want to play watergames and it also cools down hot feet in the summer. It´s placed next to Dalstugans restaurant and ice cream shop.

Just a short walk along the river the animals from the chalet is waiting to show off and get patted. Here´s a café with a large amount of local-/ecologically products.

Säterdalens canyon system and it´s steep slopes are unique for Sweden. The high ferns, dense bushes, herbs and rich amount of birds gives you a kind of tropical impression. The dense leafy woods opens op to make place for the hilly meadow and pasture.

Säterdalen is one of the main examples of a current living canyon landscape in Sweden. Along the walls of the canyon grows a jungle looking leaf forest with high biological values and a large biodiversity.

The nature reserve in Säterdalen was formed in 2001. The main reason with the reserve is to keep the biological diversity, cherish and keep the valuable nature and also to handle the needs for outdoor recreation. The best way to explore Säterdalen is to walk along the trail that goes by the beaches of Ljusterån.

The rules in reserved area are:

-It´s not allowed to harm or kill, - standing or lying, - trees and bushes, dig up plants,- collect moss, lichens or mushrooms.
-Thanks to the exemption from prohibition that applies cycling and riding in the nature reserve, it´s possible to travel in some places in the unique environment with a bicycle or a horse. If you do, then take a good look at the map.
- It´s not allowed to drive motor driven vehicles on bare ground (read the trail driving law).
- During the period of 1 March-20 August dogs needs to be kept under supervision so they don´t run around loose in places where there´s other wildly living animals. During the rest of the year dogs are supposed to be under supervision to prevent that they actuate or chase the wild animals, when they´re not used during haunting season.

How it became a canyon and what happened then?

Geology- from ice age till today

Säterdalen is one of the main examples of a current living canyon landscape in Sweden. The canyons grow all the time and develop through a bunch of natural factors. After the last ice age a large amount of material was conceived in the bottom of the valley where Dalälven flows today. Through these easily eroded soils the Ljusterån and Hyttbäcken have digged themselves further down. So the results that we see today is from a thousand years of water operations. In the present Säterdalen has got 35 lateral canyons and the deepest ones is about 50 meters under the surroundings.

During a long time Ljusterån have been used as a power object. Many forges and older factories have been located in the valley. 1619 a gar mill was places in the valley to clean the ore of the copper from Falu copper mine. The first copper coin mill in Sweden was located in Säterdalen. Left-overs from ponds and bases are still there, even after all the water mills that been used earlier.

Gruvkonsten - "Säterkonsta" during the 1700´s was considered as one of Dalarnas seven wonders.

Gruvkonsten transferred through a water week power to Bispbergs mine. The art house with the 8,6 meter in diameter big wheel and a part of the rod was recreated during the year 1988, but further renovation is needed to make it fully functional.

Over a hundred years Säterdalen has been a place of entertainment.. In 1890 Dalsällskapet was created and here they had lectures, gimmicks and all sorts of music entertainment. 1903 the first outdoor festival was arranged and about 6000 people came, most people arrived by train or bike. Some years after that the "Säterspelen" was introduced with theatre games, circus and a funfair. The theatre "The gods in Valhalla", about Vikings, was very popular in 1908. In 1913 there was a visitor record. 20 000 visitors were paying to see "Bröllopet på ulfåsa" with Gösta Ekman as one of the actors.

Dalstugan is designed by Magnus Dahlander and was made in 1920, here there´s still serving in summertime. The current chalet was built in the end of the 60´s. In 1931 a new music pavilion was inaugurated on Dalslätten, that now is in the a part of the big stage (Stora scen). Dance, concerts and a famous midsummer celebrations attracted people before and still does. Through the years a countless amount of artist performed there. Among all the celebrities there are names like ABBA, Jerry Williams, Monica Zetterlund, Povel Ramel, Ted Gärdestad and the world champion in boxing Muhammed Ali.

How to get here

Säterdalen is located in the county of Säter, just a couple of hundred meters from the center of the town.

Between the town and the valley there´s Riksväg 70 and the railway.

By car: RV 70 and turn towards Säterdalen in the only crossing with traffic lights in Säter, shortly after crossing the railway you´ve reached the parking lot on the upper side.

By train: It´s a short walking distance from the train station, just follow Kungsvägen a couple of hundred meters.

From the town by foot: Walk towards the tunnel from Järnvägsgatan. On the opposite side of the tunnel you´ve got Sätergrillen and the tourist office.

By the entrance there´s Gruvplan, a big gravel area that´s used as a free parking lot. Here you can walk down the hill to Säterdlen. By Gruvplan there´s also a information spot and a small playground.

There´s also a parking lot further down from Gruvplan but with a limited amount of parking spots . Obs! It´s not allowed to park on the road down to Säterdalen.

At the parking lot furthus down there´s also a special parking spots for hcp-vehicles/disabled.

If you walk by foot from Gruvplan, the train station or the town, for your own safety choose to walk under the entrance sign in wood that says ´´Säterdalen´´. Regular traffic is not allowed here but it´s used by cars with hcp-permit and deliveries and also by vintage cars on their Tuesday meetings. The road to the parking lot down in Säterdalen is less appropriate because there is more traffic. Both of the roads town into Säterdalen are leaning quite much.

In Säterdalen your dog shall be leached. Everyone is welcome, but all dogs, as respect for other visitors, the animals that are living and walking around in the canyon system and the chalet, shall be leached. By the chalet animals walks around loose and because of that are not dogs or other animals aloud to walk into the chalet.

Toilets are placed in a building at Spikholmen, behind the serving at Dalstugan. Here´s also a handicapped accessible toilet and a chancing table. By the chalet there´s an aoutdoor toilet.