Storsätern mountain chapel and Dalarna northernmost temple was inaugurated on December 21 in 1968. The building was built in a rustic style and covered with tarred chips.

Unique to the chapel is that it lacks the altarpiece, instead, visitors can enjoy mountain årsskiftningar through the high korfönstret. The interior is simple, sober, tasteful. Seating for 150 people.
Here are kept the popular and beautiful music, church services are held in the summer with a concert and sometimes sing.

Altarpiece is missing, but the high korfönstret offers a panorama of mountains, which also varies with the year's rhythm and the daily times.

The organ was installed in the 1971st It has its place in the chancel, was built by Walter Thyr and funded by a donation.

The crucifix has been cut by Kurt Hammarsten, who some time before stood Grövelsjöns tourist station. Of a large träknota, mounted on a stump, has woodcarvers Tage Berglund in Idre perfected the original baptismal font, as David Tägtström complemented by a dopskål of silver.

The church bell was originally a simple shelter in the chapel's roof. It turned out that this shelter muffled sound, which is why in 1975 replaced it with a separate bell tower.

Follow the road north towards Grövelsjön, from Idre about 35 km. Pass the country store Fjällbua, and after that on the right side is a gravel car park just before Storsätra Mountain Chapel in front of a piece into the woods. 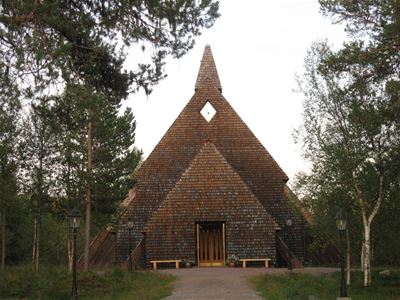 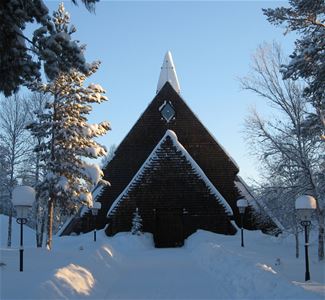