The area consists of Kvarnbäcken's old hydropower plants. In total, there have been 12 salt mills, a sawmill and a planer house. Today the saw house, The Planing-mill and a mill house are preserved.

In the area there are also remains of canals, dam construction and mill facilities which testify that the water power was used here for hundreds of years.

Mångsbodarna are included in the 1663-64 years inventory, where Bächieqvarn is mentioned. During the time of the old farmer culture, rivers and streams used water power for milling grain and for woodworking.

During the 1970s, the salt mill, saw and planer house were restored.

The Planing-Mill
The Planing-Mill was built in the 1890s. Here is a planer and pertsaw designed by Dys Erik Andersson. It was manufactured in 1893 by Anders Mattson's Mechanical Workshop in Mora. The planer was driven directly by a water turbine that received water through a drawer. Here you plan, among other things, short moldings for door and window frames. In the planing house there was also the Tvärtöversågen (Twertyvyrsågen in Elfdalian), which is a special cutting saw for cutting short substances such as cuttings, roofing materials or Wood.

The Sawmill
The sawmill was built in 1869 by seven partners at Stumrådsbäck, about 2km north of the reserve. In 1892 the saw was moved to the place it stands today. Initially, this frame saw had only one blade but in conjunction with the move it received a new frame with room for up to eight blades.

The Small Water Mill
The mill is of old date, probably from about the middle of the 19th centuary, and was renovated in 1945. It is turned by water that is led through a flume to the blade Wheel.

The Power is transmitted through the millstone by way of the iron sail to the upper movable millstone. It is supported by a pole fixed in a hole bored in a stone in the ground. The corn is ground betweeen the lower fixed stone and the upper rotating stone.

Within the reserve, it is not allowed to:
- Make a fire,
- drive a motor vehicle other than on an existing road,
- breaking twigs, mowing or otherwise damaging live or dead trees and shrubs; by digging up flowers, grass, mosses or lichens. 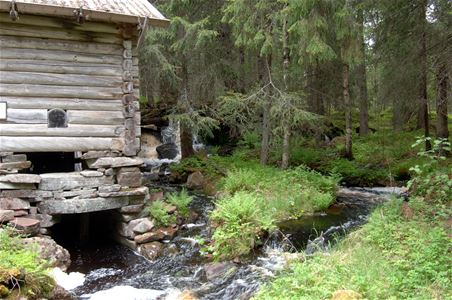 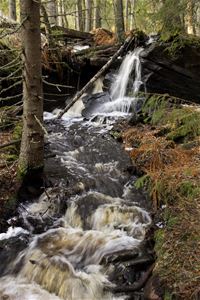 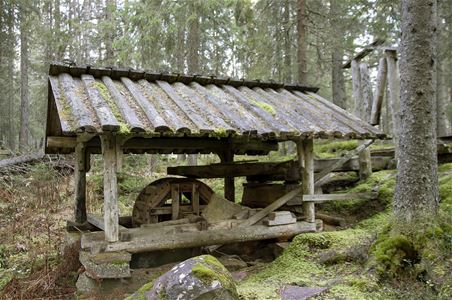 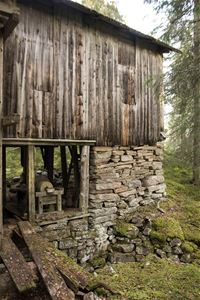