On the templetun where the bishop of Nidaros (now Trondheim) to have preached the message of salvation was erected during the difficult depression years 1932-33 Idres fourth church.

Nobody knows with certainty when the first church was built in Idre. A tradition does, however, contends that it would have appeared as early as the 1403. A small chipdressed church was, however, with certainty, the 1624. The test of time for the harsh climate havoc with the little chapel, which was first imposed as early as the 1780s, but that a planned new settlement was reached. A new church was built out in 1842, designed by architect C. Stahl. Then demolished the original church.

The new church had no heat and had a modest exterior. With its square windows was similar, except for the small tower, a white-painted houses. The tower was bad and the church freezing cold. Therefore, updated once a new church be built in conjunction with Bishop Billings visitation in 1894. Architect G. Améen drew a proposal that was adopted in 1908.

On 20 September 1914 inaugurated a grand Falun red cross church with a mighty central tower, whose spire seemed far away. Two years later, Idre independent parish. But the joy of the new church only lasted for eleven years. One Sunday evening in November 1925 the church burned down.

After much hesitation it was decided in 1932 to allow the construction of the existing temple at the ancient site at Idre Sea. The architect was Knut Nordenskjöld. On November 19, 1933 could Idre residents for the second time in 19 years inaugurate a new church. This Idres fourth church was given a style very reminiscent of old church. The interior was simple and straightforward, uncluttered, with sparse decoration. They closed pews can seat 250 people and is separated from the chancel by two graceful obelisks bearing the opposite golden star. A crucifix done by Carl Fagerberg is eye-catcher on the altar. Colors are predominantly in gray, and above it all arches a beautiful barrel vaults.

The church building
Idre church is dominated by its strongly accentuated tower. In the tower are three bells: large bell, little bell and a steel bell (t F) of tower movement. The large bell and the little bell is cast in 1933 for the new church and the third clock is made in Bochum 1875.
The church interior is tight and economical, but true to style. The interior is dominated by the large crucifix on the cross wall. The entrance to the chancel is marked by two carved obelisks, crowned by morgonstjänor. The nave walls are adorned with sconces where landscape Force included: Dalpilarna, crowned with a ducal crown.
1933 organ, 2 manuals o Pedal - 10 stops, was replaced in 1971 with a brand new. The new organ was built by Olof Hammarberg in Gothenburg. It has two manuals and pedal, a total of 13 voices. The organ was inaugurated by the then organist in Mora, Gunnar Rosenberg.
Above the entrance. the sacristy are 1768 years of church bell. It bears the inscription, 'Mountains and valleys bless the Lord. Hallelujah Lauda et mines Olymporum anno 1768. " 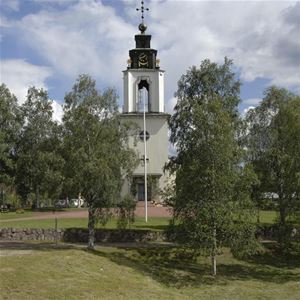 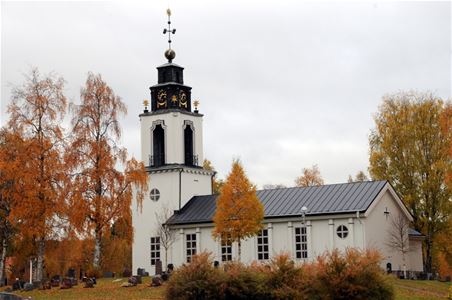 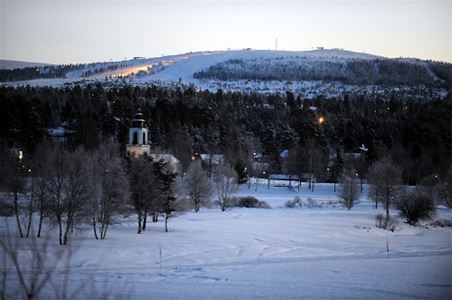