The first stone church was ready to be operational in 1585th

The first stone church was ready to be operational in 1585th. Almost 100 years later the church was too small and it was decided to build it out on the south. in 1783 the church was built out to the east. The tower was added in 1816. The years 1824 to 1826 the church was expanded to the current size. 1903-1905, the church received the decoration you can see today. In 1904 the spire on the tower was built. The columns under the organ loft is Garbergs granite. The stone comes from Garberg and was polished in New Porfyrverket, that you can visit in Västermyckeläng, on the west side of the river. It took seven months to sand the columns. The old pulpit and altar were removed in 1903 and is now available in Åsen's Chapel. The last renovation was in 1980. Then came the floor of polished granite, walls and ceilings were cleaned and the altar was lined with fabric, woven by an old Älvdal pattern, älvdalsdräll. Älvdalens church has three bells. The oldest, the great bell, made ​​in 1855. The middle clock and the little bell were made ​​in 1903. The old middleclock is still remaining. It is made in 1585 and is now used as a kind of clock tower clock. 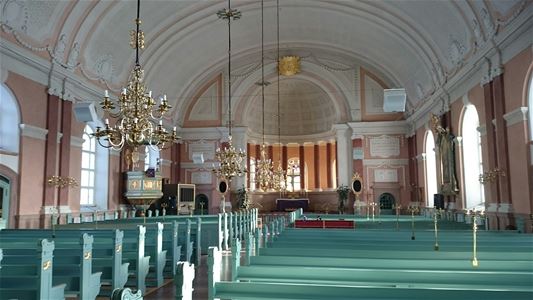 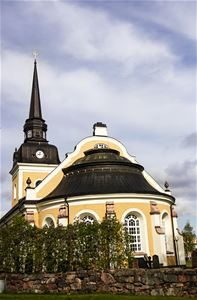 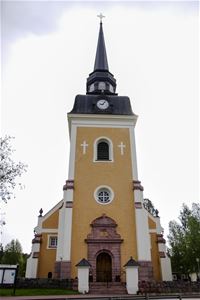