In the northern part of Sollerön lies the popular excursion destination Agnmyren nature reserve. A bright highlight for those interested in geology is the striking fault slope Klikten formed by the meteorite strike. It provided the conditions for a valuable natural and cultural landscape and offers views of fields, meadows, forests and red cottages. Here is also an exciting cultural trail at Dalarna's largest burial ground from the Viking era and photographer Karl Lärka's summer place.

Geology
Agnmyren is a small pond located in the northwest part of Klikten. The faulty slope that goes over Sollerön in a north-south direction. In the southeastern part of the reserve is a small limestone quarry, called the "Silver Mine", where minerals such as zinc blend and lead sheen were mined. Remains of the mining, so-called warp, are visible as piles in the vicinity. Part of the slope has been protected as a natural monument since 1986.

The western part of Sollerön's bedrock consists largely of so-called Orsas sandstone from the geological period Silur. Orsa sandstone is about 425 million years old and is the youngest sedimentary rock in the Siljans area. It is a red, fine-grained, quartz-dominated sandstone, whose original material is sand deposits on land. It overlays siluric siltstones (finer-grained than sand, but not as fine-grained as clay) and limestones.

On the eastern side of Sollerön, the bedrock consists of much older rocks - granites and iron granite diorites, which are about 1.8 billion years old. Closest to the west of Agnmyren is a strip of clay slate. Around the pond there are thin surface layers of clay, soil and peat in areas with moraine and clay. In the most well-trained part of the fault slope in the natural memory, the ground cover is very thin and the bedrock is made up of Ordovician limestone.

Flora and fauna:
The calcareous water provides excellent plant conditions for leaf reed, broadleaf and yellow sword lily. During the month of April-May, ordinary frogs gather in thousands to play in the pond. A few weeks later a smaller amount of field frogs are playing. The smaller water salamander is available in quite large numbers.

From the church at Sollerön's highest point: Head north towards the village of Bengtsarvet. 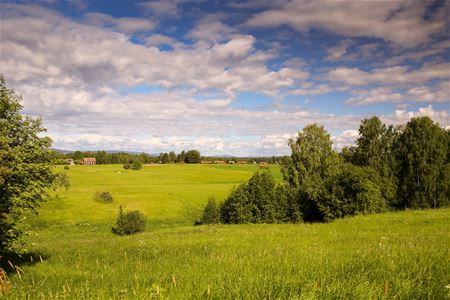 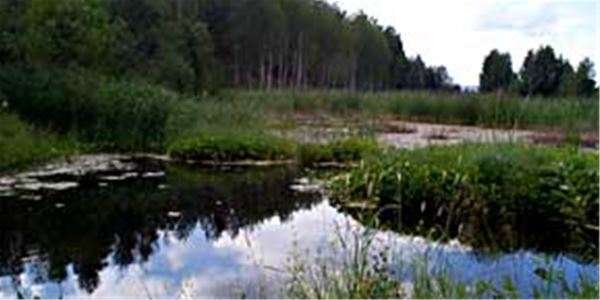 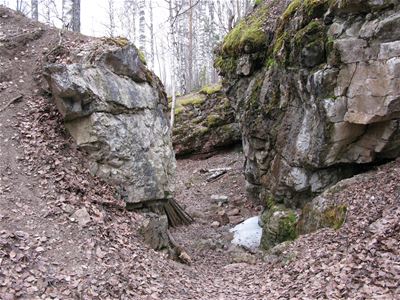